I’m teaching AP Lit for the first time in about fifteen years this year. And I’ve started doing something that I never did in those years before: I’m doing the timed writings I ask of them. When they sit down to write, so do I. Under the same time restrictions, they and I both struggle to make sense of a dense passage or of an abstract poem or work to conjure up enough to say about a novel that we’ve read and discussed together.

The first few I wrote were the poetry or passage analysis type of prompt. We all had the same text sitting in front of us, the same question to answer, the same blank sheets of lined paper, the same requirement for blue or black ink, the same chunk of time. I discovered that the task is really challenging, and even more challenging with the limited time. I discovered that my brain maybe works more complexly than it did when I was seventeen–good because I could find more to write about but bad because it was complicated and difficult to reign in concisely in about 45 minutes. The result of me writing with them was some first-hand knowledge of their experience and a better ability to coach them in my feedback as I read their work and talked with them as a class about how they all approached the analysis.

But it was in the “question 3” style essay that we wrote where I really started to wonder why I had never written the timed essays with my students. I found a couple of prompts from the list of past AP Lit exam prompts that I thought would be fruitful for my students to write about Othello a few weeks ago as our ultimate culmination of our work with the text. We had a fruitful socratic seminar conversation the day before the timed writing, which is an excellent prewriting activity. My students have always struggled with clear theme statements that capture what they think a work of literature is asking of us as human beings, so as they spoke in the seminar, I made sure to point out the theme statements that naturally spilled out of the conversation. I encouraged students to list theme statements in their writer’s notebooks and think about which aspects of the text got to those themes–good prep, I thought, for the next day’s timed essay.

And then I went home and spent my evening probably reading student papers and such per usual, not thinking anything of the timed writing task that was waiting for my students and me in class the next day.

And I was woefully unprepared.

I’m the teacher, right? I had all the text details in my head, right? Surely I was ready to write an awesome essay. Hmm.

I struggled. Significantly. When I needed a clear, concise theme statement that lined up with the prompt I had chosen to write to, I couldn’t pull one forward in my head as readily as I needed to. I stumbled through the intro–it took me ten of my precious minutes to write it, and it came out of me in fits and spurts, many words crossed out along the way. By the end of the intro, I had a plan for the rest of the essay, but I struggled even more. I kept asking myself, “when exactly was that moment when Iago said________?” And “at what point of the play did Othello____________?” I had the generalities of the play at my fingertips, but the specific details I needed to write a well-supported interpretive analysis were nowhere available in my mind. It was so frustrating.

The bell rang and I wasn’t even close to being finished. I wrote hugely on my paper where the rest of the essay should have been, “LESSON LEARNED: review theme statements and text details for a more successful writing experience.”

Then I started to wonder how many of my students had had a similarly frustrating writing experience. I know the prep work I needed to do and didn’t do, but do they? Do they know what they should be doing to prepare for this kind of task?

Since then, we’ve made some changes. The last few minutes of every discussion day about our books is reserved for some very targeted writer’s notebook work–collecting theme statements and details from the text that students could use to write an essay arguing for that particular theme statement. Here is one page of notes in my writer’s notebook toward that goal: 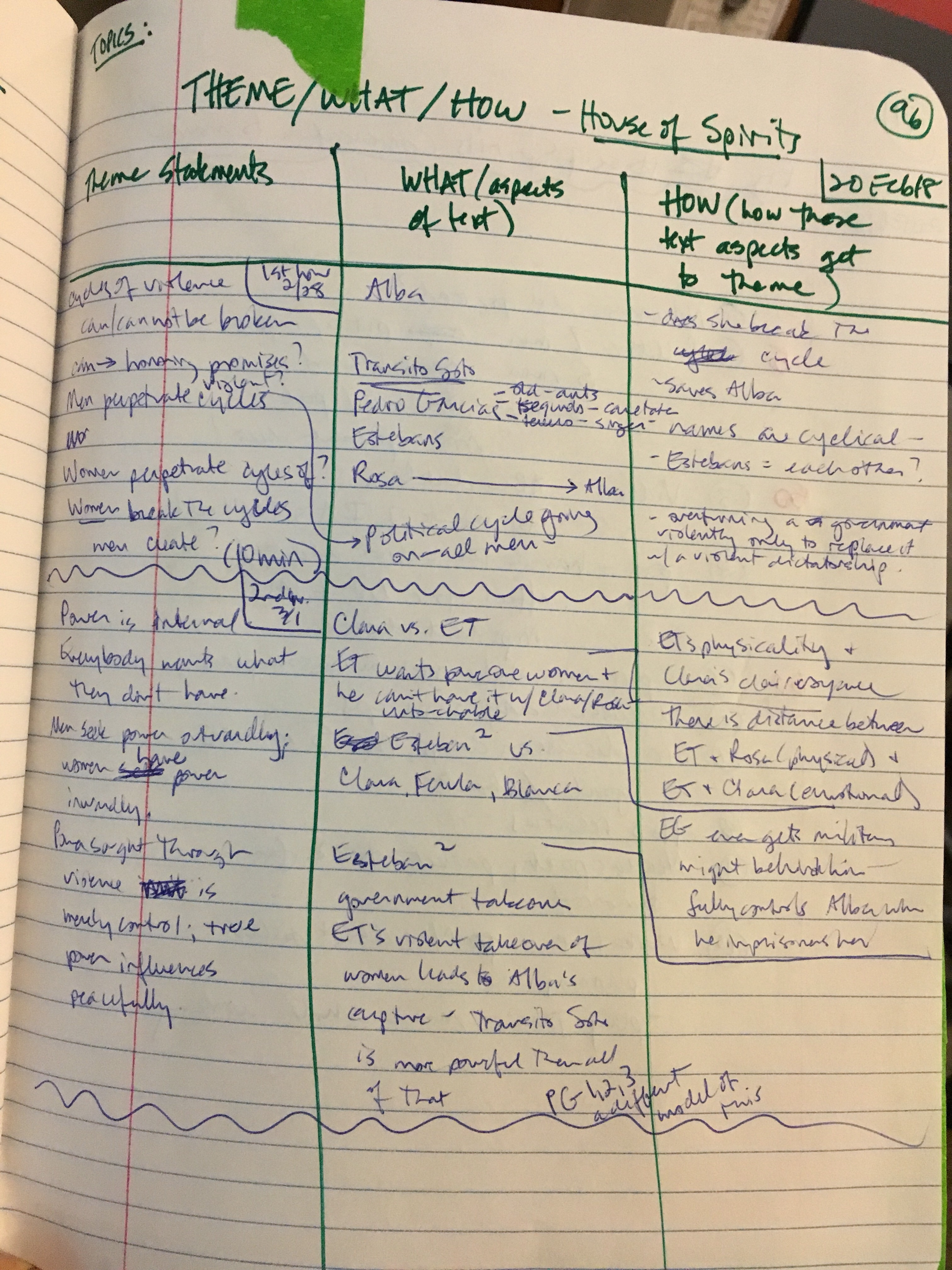 Had I not been writing timed writes with my students, I would not have seen–from inside the process of doing a timed write–that my students needed some additional instruction. The few minutes we spent on theme statements and related text details at the end of class discussions this past semester were time extremely well spent. Students reported that they felt prepared for the open question on the AP exam due to this work that we did.

One cornerstone of writing workshop is that the teacher needs to be a writer too. The idea is that writing is best taught by someone in the midst of the struggle of writing. You see things there that you don’t see if you’re standing on the outside, watching your students write and then responding to their writing from there. How long has it been since you did the kind of timed writing required on the AP Lit exam? Get in there and write with your students. Yes, you’re trading the precious time you get when an entire class is busy with something for a class period and they don’t need you. Yes, you have to find time outside of class to do your own prep work for the essay. Yes, I’m asking you to willingly do something that’s kind of frustrating–spitting out a coherent argument about a complex text in the space of 45 minutes or so. But I argue it’s necessary. (And the literature geek in me thinks it’s actually kind of fun!)

This post is part of a blog series on teaching AP Lit with readers/writers workshop. Click here to see the entire series.

3 Responses to The importance of writing with your students… #WorkshopWorksForAP